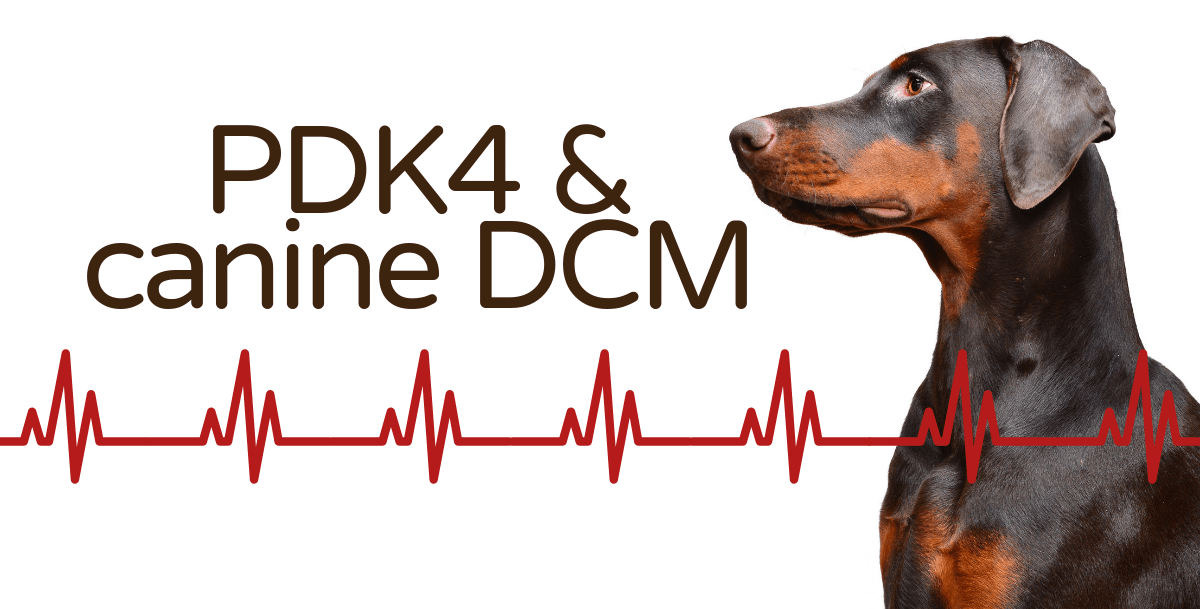 Alternative title: My dog’s Embark results say s/he is “at risk” for DCM. What does this mean?

The purpose of this article is to serve as a comprehensive summary of PDK4 and DCM in dogs for owners who are looking for more in-depth information on the PDK4 mutation and what it means if their dog has copies of this mutation.

Embark tests for over 160 different markers for genetic diseases in dogs, one of which is the PDK4 splice site mutation that has been associated with DCM in American Doberman Pinschers. Embark provides some helpful information about this mutation which can be seen in the following screenshots:

Click here for information on dilated cardiomyopathy, or DCM, in dogs.

Is DCM caused by a taurine deficiency?

Some genetic mutations may affect the function of proteins directly involved with the structure and function of cardiac muscle tissue, resulting in DCM.   Other genetic mutations may affect the metabolism of certain nutrients that are essential for normal cardiac function (including but not limited to taurine). Dogs affected by this type of mutation would be more susceptible to dietary deficiencies, and DCM would be a result of the deficiency caused by that abnormal metabolism.

Dogs have 39 pairs of chromosomes. Chromosomes are structures of tightly packed DNA molecules. Genetic traits are inherited from each parent, and the blueprints for those traits are packed into chromosomes. Each chromosome carries lots of traits. The location of a particular trait in a chromosome is called a locus, and two alleles – one from each parent – can be found here. An allele represents one of the various possible traits for a particular gene. If both alleles inherited from each parent are the same, then the dog is homozygous with respect to that gene. If each allele is different, the dog is considered heterozygous with respect to that gene.

Genes are sequences of DNA that contain the blueprints for building proteins and other molecules. DNA consists of two strands that are bonded together like a ladder. There are four molecules called bases – adenine (A), guanine (G), cytosine (C), and thymine (T) – forming the “rungs” of the ladder.

DNA is replicated, transcribed into mRNA, and then translated by tRNAs into proteins. This process is referred to as the central dogma of molecular biology.

A group of 3 bases on the mRNA is called a codon, which function as “words” that can be “read” by ribosomes and tRNA during the process of translation. Most of these codons represent individual amino acids, while others represent “start” or “stop” locations. A ribosome recognizes a codon that says “start” and attaches to the mRNA at that location, then begins traveling down the strand. As the ribosome passes codons, tRNAs bring the amino acids represented by each codon, and these amino acids are added together to form a chain. This continues until the ribosome comes to a codon that says “stop”, at which point the ribosome detaches and the chain of amino acids is released.

This chain of amino acids forms a protein. Proteins are incredibly diverse molecules with many different functions throughout the body – structural proteins, transport proteins, hormonal proteins, and enzymatic proteins are some examples.

Sometimes individual bases and/or entire codons might be out of order or missing from the DNA – like a typo in the protein’s blueprint – resulting in the codons being read incorrectly. This can result in the ribosome starting or stopping in a different place and/or the tRNA putting different amino acids in different orders. This might mean that a completely different protein is produced, or even no protein at all. This is how genetic mutations happen.

PDK4 stands for pyruvate dehydrogenase kinase 4, an enzyme located in the mitochondria of cells involved in the regulation of energy metabolism. Enzymes are specialized proteins that catalyze reactions within the body by recruiting molecules into their active sites and modifying their shape or structure. The PDK4 enzyme’s job is to inhibit another enzyme called a pyruvate dehydrogenase complex (PDC) by changing its structure in a way that prevents it from converting pyruvate into acetyl-CoA.

Pyruvate is the end product of a process called glycolysis, which converts glucose into pyruvate. This is where the PDC steps in to convert that pyruvate into acetyl-CoA, which can then be used in a process called the Krebs cycle (also known as the citric acid cycle). The Krebs cycle uses acetyl-CoA to make energy in the form of ATP. In this way, PDC links glycolysis and the Krebs cycle together, seamlessly allowing glucose to be utilized as energy. This is an important job – after a dog eats a meal, macronutrients can be converted into glucose, and PDC is essential in the utilization of that glucose as energy.

However, after most of the glucose is used up, the body needs another method of obtaining energy. This is where PDK4 steps in – its job is to regulate energy metabolism by inhibiting PDC, essentially breaking that link between glycolysis and the Krebs cycle, and causing the cell to start using a different method of energy production called oxidative phosphorylation.

Oxidative phosphorylation has a much higher yield of ATP. This happens to be especially important for cardiomyocytes (heart muscle cells), because their very important job of producing ventricular contractions requires a lot of constant energy – it is their responsibility to make sure the heart keeps pumping! Thus, oxidative phosphorylation is the preferred method of energy production for cardiomyocytes due to the greater amount of ATP produced; in fact, more than 95% of ATP generated in the heart is derived from oxidative phosphorylation, and approximately 70-90% of that ATP is generated by the oxidation of fatty acids.

If PDC is not inhibited, the cell doesn’t switch over to the more efficient method of energy production when blood glucose levels are low (which is what happens when it has been a while since the dog has eaten a meal or when the dog has used a lot of energy during exercise). This constant reliance on glycolysis long term doesn’t generate sufficient energy for cardiomyocytes, resulting in contractile dysfunctions in the heart over time.

As stated earlier, if the PDC is never inhibited and glycolysis is the only method of energy production being utilized, the cardiomyocytes aren’t able to get enough energy. When a cell can’t get enough energy, it becomes stressed, which might cause it to undergo a process called mitochondrial mediated apoptosis. If a cell becomes stressed due to lack of sufficient energy, and it isn’t able to find a way to fix that problem, the mitochondria might receive signals that cause it to induce cell death.

PDK4 isn’t the only enzyme that can regulate energy production in this way. In fact, there are 4 of these enzymes, and the others are predictably named PDK1, PDK2, and PDK3. PDK4 is the most predominant of the four in cardiac tissue, but PDK1 and PDK2 are also expressed in heart tissue (PDK3 is too, but in much smaller amounts).

This explains why the PDK4 mutation is “incompletely penetrant”: because technically this mutation alone should not lead to DCM, as long as other PDK enzymes are present in sufficient amounts and there is nothing else inhibiting them, and as long as there aren’t any additional factors at play.

This is why a dog having this mutation is not considered at risk of developing DCM at this time unless the dog is a purebred Doberman. Again, to reiterate:

Why are Dobermans different?

DCM is a very complex, multifaceted disease, and we don’t have all the answers yet. Genetic markers for DCM are different in different breeds. It is especially complex in Dobermans, a breed with critically low genetic diversity. Low genetic diversity means that deleterious recessive mutations in the population are more likely to be passed on. At this time, we have only discovered a handful of genetic markers associated with canine DCM (and only 2 in Dobermans that are available as genetic tests), and that is probably just the tip of the iceberg.

“The incidence of idiopathic DCM in Dobermanns is higher than in all other breeds combined.”

Considering how much more pervasive DCM is in Dobermans in comparison with other dogs, it is clear that there are multiple genetic factors at play in this breed. This may also explain why PDK4 has only been correlated with DCM in American Dobermans at this time, and why PDK4 doesn’t seem to carry the same risk in European Dobermans (yet European Dobermans still experience DCM at a similarly high rate as American Dobermans). In the European PDK4 study, the mutated allele was slightly more frequent in DCM cases than in controls, but the association was not strong enough to be statistically significant.

This means that Dobermans whose risk of DCM increased due to the PDK4 mutation are likely to also have some other contributing factor(s) (which could include not only genetic factors but also dietary or environmental factors), and the combination of those factors is what lead to the development of DCM – not the PDK4 mutation alone.

What does this mean?

If you have a Doberman, these are some things you should keep in mind:

A DCM2 linkage test has also been made available through Embark. The DCM2 mutation is a variant in the titin (TTN) gene, the gene most commonly associated with DCM in humans. Titin is a large protein expressed in cardiac tissue that acts as a molecular spring, contributing to stiffness and contraction in cardiac muscle. A mutation in the TTN gene results in the expression of a titin protein with an altered structure, affecting its function in the heart muscle and leading to a predisposition to DCM. If your dog tests positive for the DCM2 linkage:

Symptoms of DCM include lethargy, exercise intolerance, shortness of breath, and coughing, but in many cases there are no clinical symptoms until the dog has gone into heart failure.

The current screening guidelines for DCM in Dobermans recommend annual 24-hour holter monitoring and annual echocardiogram, beginning at 3 years of age. The purpose of these tests is to catch DCM before your dog goes into heart failure. If you can get an early diagnosis of DCM, medication can extend your dog’s life.

If your dog is not a Doberman, the risk of developing DCM is significantly lower, with or without PDK4. However, there are currently no studies evaluating the risk of PDK4 in breeds other than Dobermans. That means we don’t know know for sure if PDK4 carries any significance in other dogs.

As for DCM2, this gene variant has not been specifically studied in other breeds to my knowledge. However, considering its prevalence in human DCM, it doesn’t seem to be exclusive to Dobermans. I found some studies that used canine models (unidentified breeds, presumably not purebred Dobermans) in the assessment of titin’s role in cardiac function. That said, there are multiple variants of the TTN gene, multiple isoforms of titin, and multiple other factors that affect the function of titin, so more studies are needed to establish the significance of the specific DCM2 TTN variant in other breeds. (There’s a lot more to say about titin, but I’ll save that for another article – this one is long enough already!)

Talk to your vet if you are concerned about your dog’s results. You might even consider getting an echo done for peace of mind.

If you have had your dog’s heart evaluated, Embark has requested that you send them those results at howdy@embarkvet.com. This can help them learn more about the significance these mutations might have in other breeds!